Dino Dini - A gamedev with many missions 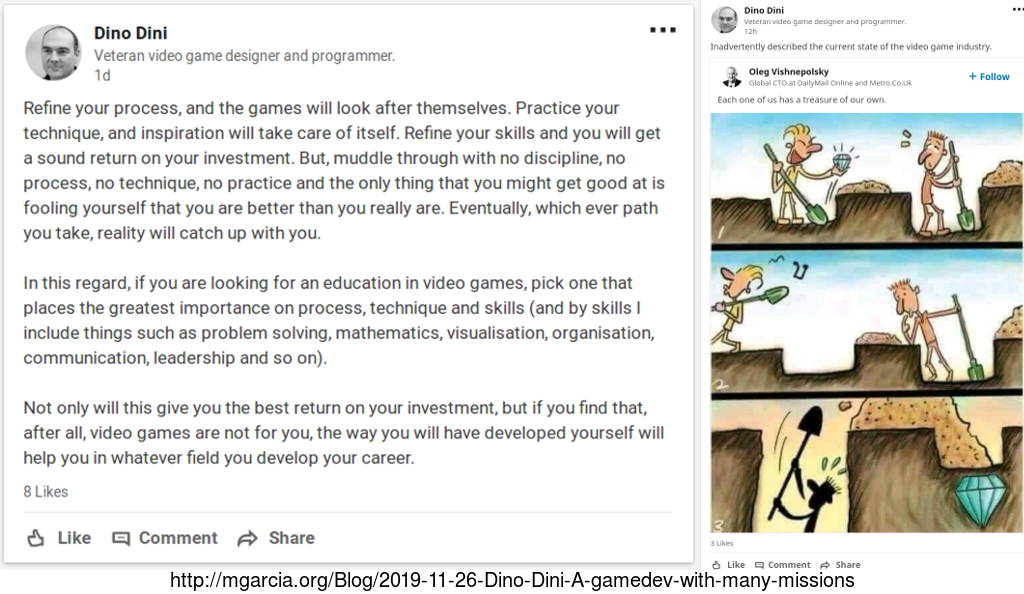 Some screen captures of Dino's wisdom from linkedIn.

Join Dino's Discord: https://discord.gg/xNPJRsC
He may or may not be on twitter: https://twitter.com/DnDn1011

Dino Dini is back, well he never really left, he was busy finishing his studio recorded album!
He just started a podcast series: "Moths of Programming" where he talks about myths of Computer Science, the first episode (Chapter) is about Global Variables and the second is about Goto statements, all are at https://logamp.com/dino

He talks about where the idea that global variables are bad originated from, which is interesting insight.

I use global's, well everyone does as Dino explains in the podcast, but I don't see it as global, static or local, I see it more like Heap or Stack memory, which is hardware focused, and further to that regarding embedded software, I'm mostly concerned about maximizing cache efficiency.

Dino mentions software architecture and structure as the most important skill to teach his students, the two videos below are short bits from Dino's 2017 twitch stream, Dino is working while talking about education in Computer Science and Gamedev, it's not edited and I left his struggles with unity3D at the end because it's both interesting and humorous.

And advises to separate the making of games, from the practice of principles (listed above). This is really great advice, the craft of a programmer is to be the best thinker and programmer, speed comes with practice not more software.

He mentions the "pillars of understanding", I call this a "knowledge software stack", this is what Johnathan Blow talks about in his Preventing the Collapse of Civilization talk.

I see a lot of similarities between Jonathan Blow and Dino Dini, Blow also has talked about the broken programming culture not based on reality:

(paraphrasing)
Anyone can believe whatever they want with no penalties. The social penalties for not believing in socially accepted ideas is greater then simply just going with the popular ideas that aren't based on technical facts. It's a negative selection pressure which encourages programmers to get social decisions right rather then the engineering ones.

This problem is amplified online with social ideas generally geared to the largest group, the lowest common denominator, and the ones with the widest reach are commonly not domain experts but the ones with the most free time.

Both men are worthy of listening to, for sure!

Thanks for reading,
Mike

2 comments on "Dino Dini - A gamedev with many missions"