The Net Yaroze interviews that disappeared of the internet

I'm slowly updating netyaroze-europe.com as a wiki and one of the stories that sticks out is how vulnerable the internet is!

Daniel Chamberlain had a website with excellent gaming related articles and a few Net Yaroze member interviews, superinternetfriends.com , he let the domain lapse and it got squatted by a reseller, no big deal I thought.
Until one day, I went to read one of the interviews and found all the of the old site completely wiped off archive.org, I guess it was due to a robot.txt of the reseller.

I didn't have a backup of the interviews, thinking it would be on archive.org forever, or so I thought!
Dan was on twitter and we chatted there, but he deleted his account, I emailed him, but no reply.
I searched the internet everywhere for a copy or a cache of them, the title and description were all I could find.
I remember asking Rob Swan and other people (youtubers Retro Game On, Kim Justice and Spanish journalist from GameReport) which may have read them in their research and they didn't have a backup either, so at this stage I was pretty bummed out and desperate.
So I reached out to archive.org: 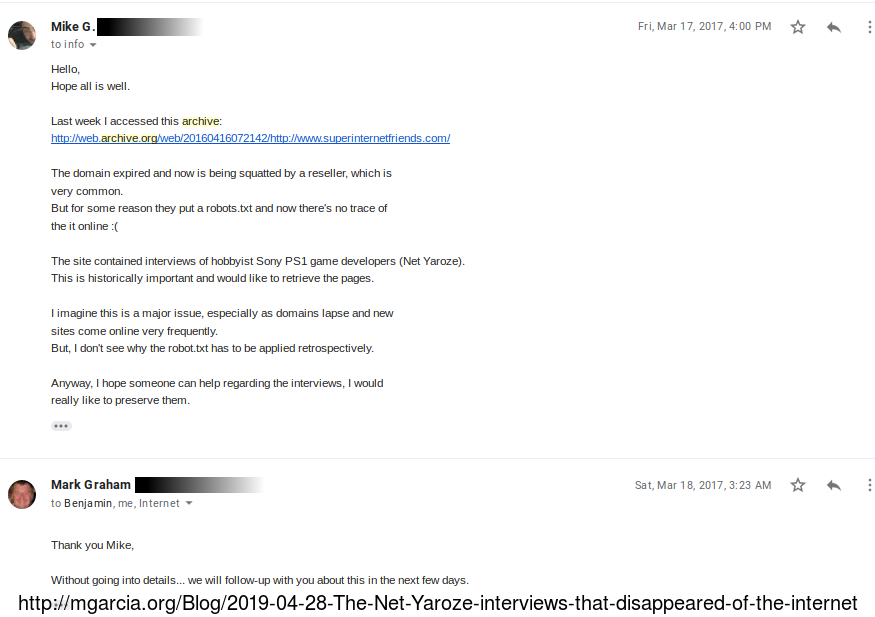 After the emails, I would check everyday to see if the interviews were restored, and a week or two later, it was all there again! I quickly did a few captures of each interview!

But old habits die hard with me, and the next day I went back again to archive.org to see if Dan's site was still there, well it wasn't!
I thought maybe that was it.. maybe they just gave me a few hour window to get a copy, after that I didn't think much of it, and I never got another reply from archive.org.

Until, last week I was looking something up regarding archive.org and came across this blog post, basically clarifying why it happened and how they would fix it, I'm really glad it's fixed!
Posted on April 17, 2017 by Mark Graham - Robots.txt meant for search engines don’t work well for web archives

Dan got in touch with me and we chatted about his interviews, he was happy for me to host them on Net Yaroze site, so it will be in the wiki one day....

Anyway, in the meantime, I was putting together 1999 European Computer Trade Show and got in touch with a Net Yaroze member that took some photos of ECTS 99, I'm waiting for a reply.. well it's twitter :'(

« My all in one texture Game engine programmers attracting huge wages »