My previous motorbike was a Honda CBR-250 from the 1990's which I rode that also from Brisbane down to Melbourne, via the Pacific freeway and the Hume freeway in 3 days and thought it was pretty easy, cruising at the speed limit of 110KM with no problems, that was in 2008.

Every year my old highschool friends meet up, 200KM north from Brisbane to go camping for a weekend (I have a tent and sleeping bag strapped on the pillion seat), it's something I like to be present for to catch up with the guys. Last year I drove up in less then 22 hours straight, while doing the speed limits and thought it was relatively easy for me, so why not go up again on a motorcycle, I've been wanting one as a cheap commuter anyway.

I wouldn't say I'm an experienced rider, I know how to ride a street bike well enough to get from point A to point B and survive! I like to ride aggressively I guess, but not like a psycho, I like to be either at the head of the traffic or at the end, but never in the middle. Having really only ridden a 250cc and now a 125cc, I wouldn't say I'm a speed addict! 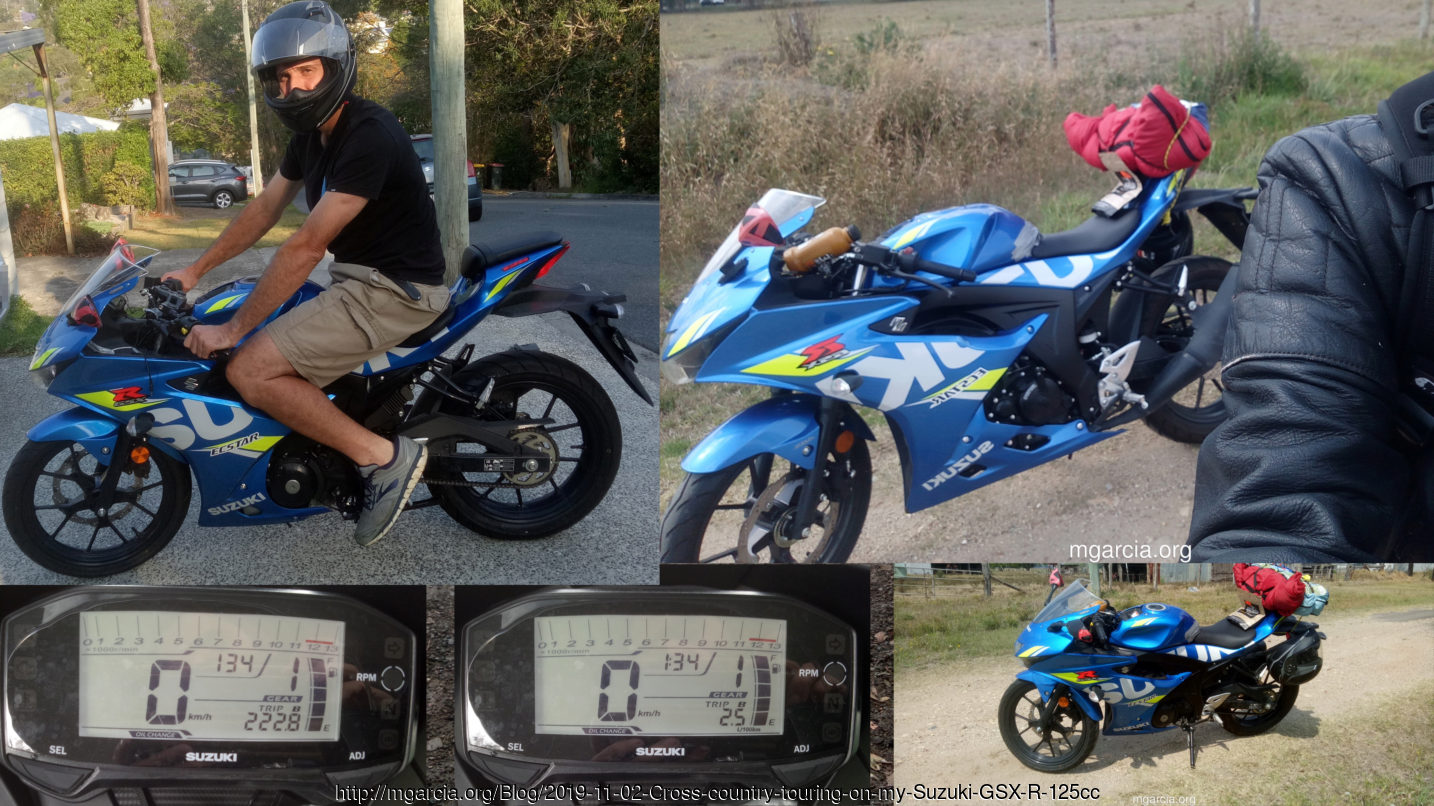 That's Dave in the image on the top left, he's a big guy, at 190cm and 90KG he said that it was okay to ride, the 125cc wasn't a problem but his knees reached the handle bars.

Plus it has a 6 speed gear box and bigger Dunlop sticky tires (for a 125cc anyway) and Suzuki make great motors and gearboxes (I had a little Suzuki Sierra/Jimny 4x4, which I used to renovate my house!).

It has ABS braking, I can hear a subtle electronic high pitch noise when activating the front brakes and it changes as I apply pressure, but I'm not sure what it actually does, I didn't feel any pulsing under heavy braking.

Surprisingly, it comes with a pretty good instruction manual, with quick How-Too's on maintenance (oil and filter etc), nothing like the details in a Gregory's manual, but still good information for a noob.

To be honest, the Suzuki GSX-S 125 Naked (black and red) bike, looks better in my opinion and probably is more comfortable to ride, especially long distances. But not having much experience riding other styles of bikes, I didn't feel comfortable learning on the long trip up, also I like the street bike feel.

The GSX-R also has a keyless start fob, which at first I thought was gimmicky but really appreciated having, one less thing I didn't have to worry about getting on and off (putting bag on, ear plugs, beanie, helmet, gloves).

Also the faring of the GSX-R helps a lot at high speeds, over 100 KMH, you will be ducking under the little wind shield visor it has.

Petrol consumption is pretty good, not so great at constant high revs or open throttle though.

The instrument panel is minimal but practical, very clean and clear, it has some nice features like 2 trip-o-meters with 100KM per liter usage, it also has a customizable oil change reminder (i have mine set to 2,000 KM instead of the standard 4,000 KM).

The riding style of the bike feels like any other street bike, you are leaning down on the angled handle bars ( /--\ ) and everything else feels right. But it sounds like a postie bike (Australian postal scooter) at lower rev's.

The bike being light (130 KG) is mostly an advantage as a commuter. The 125cc engine is enough to pull out in front of traffic with out trying, well most of the time. I mean, it will get up to 60 KMH faster then a standard four cylinder vehicle, but you'll be revving out each gear if challenged, and it has no chance against a worked or bigger vehicle.

Because it's only 125cc, it doesn't have much torque, you'll have to rev it to do work, I mean be careful riding up to the front at traffic lights, if it starts moving, you can typically just accelerate out of trouble, but on this, you'll have to gear down first.

I'll start by saying, when on the freeway and doing 80 KMH and over, I'm very tense... I have no problem admitting this. I can't let go of the handle bars and I'm squeezing hard! I can't remember if I was this tense on my CBR-250 10 years ago or if it's this bike.

Firstly, the speedo on my bike is about 7 KMH to 9 KMH over what the actual speed of the bike is, I tested this with my mobile GPS in my pocket while trying to keep a constant speed of 108 KMH's, I'm sure there's ways to adjust this and it's probably a safety first thing.

The 11 liter tank, is big enough for 300 KM to 400 KM petrol stops, but I stopped every 150 KM to be safe and rode with a one liter bottle of mentholated spirits, good for 30 KM, just in case! Being short and skinny, the small tank doesn't give my legs much to grip onto and squeeze, at low speeds, this wouldn't be much of an issue, but cruising at 100 KMH, you want to be firmly planted on the seat under the tank, I didn't feel this.

Anything at or under 100 KMH (GPS speed) the bike is okay to ride but anything over, the engine gets loud and "pinging", but more importantly I found the wind feels exponentially worse! I would guess the engine has very little horse power at that high RPM range and it's fighting the wind, and losing! ducking under the visor helps but very uncomfortable.

The other problem with the wind is because the bike is relatively light, at speed it doesn't feel 'grounded' like a bigger bike, obviously! What I mean is it doesn't take much cross wind to push it! I found riding on the freeway with extra weight, my 10KG bag on my shoulders and the tent and sleeping bag (both 10KG) on the pillion seat, better then riding the freeway without it.

So, you'll probably want to duck to avoid the cross winds at bridges, flat areas or being overtaken by trucks, etc. Again, this could be me being too tense, but I found the cross winds more 'punchy' pushing then on my heavier CBR-250 which felt more like 'dull' pushing, if that makes sense?

Another obvious thing is that you'll need to take run ups or accelerate to keep speed going up any kind of incline, I had it at full throttle a few times when I didn't notice the larger hills.

The other issue at high speeds on this bike (or any other 125cc), is the braking! On a bigger bike if you're doing 100+ KMH and you rolled back the throttle you would immediately get engine breaks, not so on this bike at speed! I remember when I found this out for the first time, coming over a hill and rolling back the throttle yet I was gaining speed while going down the hill, it really scared me! It has engine breaks, just at low revs, ie zero to 7,000 RPMS.

But more importantly, the actual front and rear brakes are too small for highway speed braking! Again, on my CBR-250 the front brakes were very 'touchy', a light squeeze was enough to slow you down and stop the bike, not on this bike at speed! To brake safely, give yourself a lot of time and room (5 car spaces at least) and squeeze hard and firm on both brakes, obviously nothing snappy though!

I wouldn't recommend a 125cc as a beginner or first motorbike. Sure it's cheap, looks and feels cool, but it's missing a lot of things which on just a bit bigger bike (250cc) will get you out of trouble, ie grounded, bigger tank, more torque and better breaks!

But if you already know how to ride and can do more with less, then it's a worthy bike, just be prepared to unlearn it when getting on a real bike!

Thanks for reading, any questions ask below.
Mike.